It seems like there are a few camps of thinking when it comes to how technology is going to impact the residential real estate agent. One end of the spectrum is the camp believes that real estate agents will always be around and the things agents do aren’t going to change much. Peruse enough Inman article comments and you’re bound to stumble on quite a few of these folks.  Then on the other end there are the folks who believe (and hope) that every part of a transaction will be driven by technology and that you’ll be able to buy a home as easily as you can buy a cup of coffee. Then there’s the in-betweeners that believe that technology is going to change things, but they aren’t sure how much.

In somewhat oversimplified terms, I believe the future of a residential real estate agent’s role, and overall number of them, depends on where the “line of acceptance” is drawn between these camps.

Assuming a normal distribution, the following is a depiction of where the camps fall in their willingness to use an agent and trust technology: 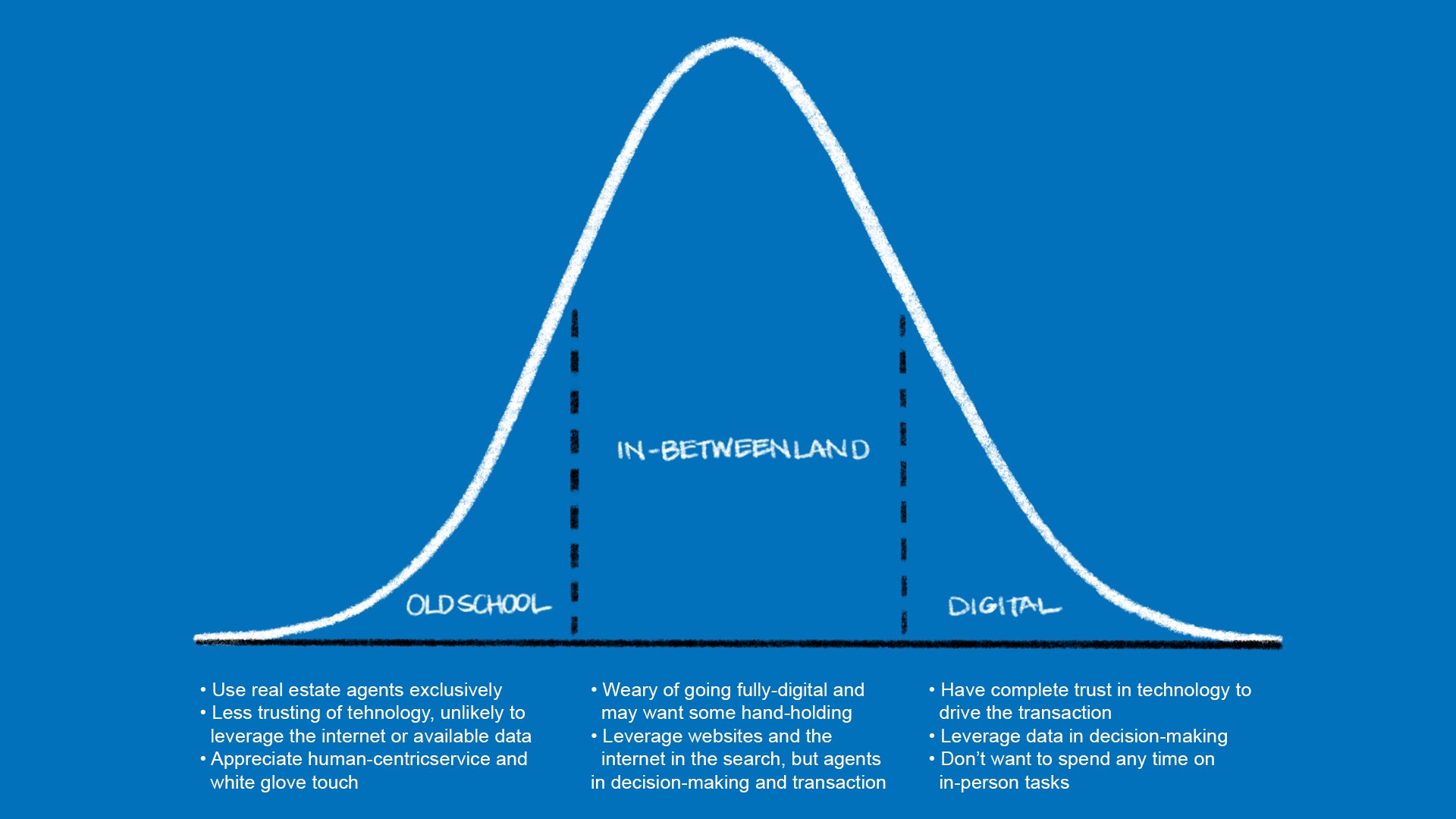 If, over time, the “line of technology acceptance” in the distribution of consumers divides the house like this: 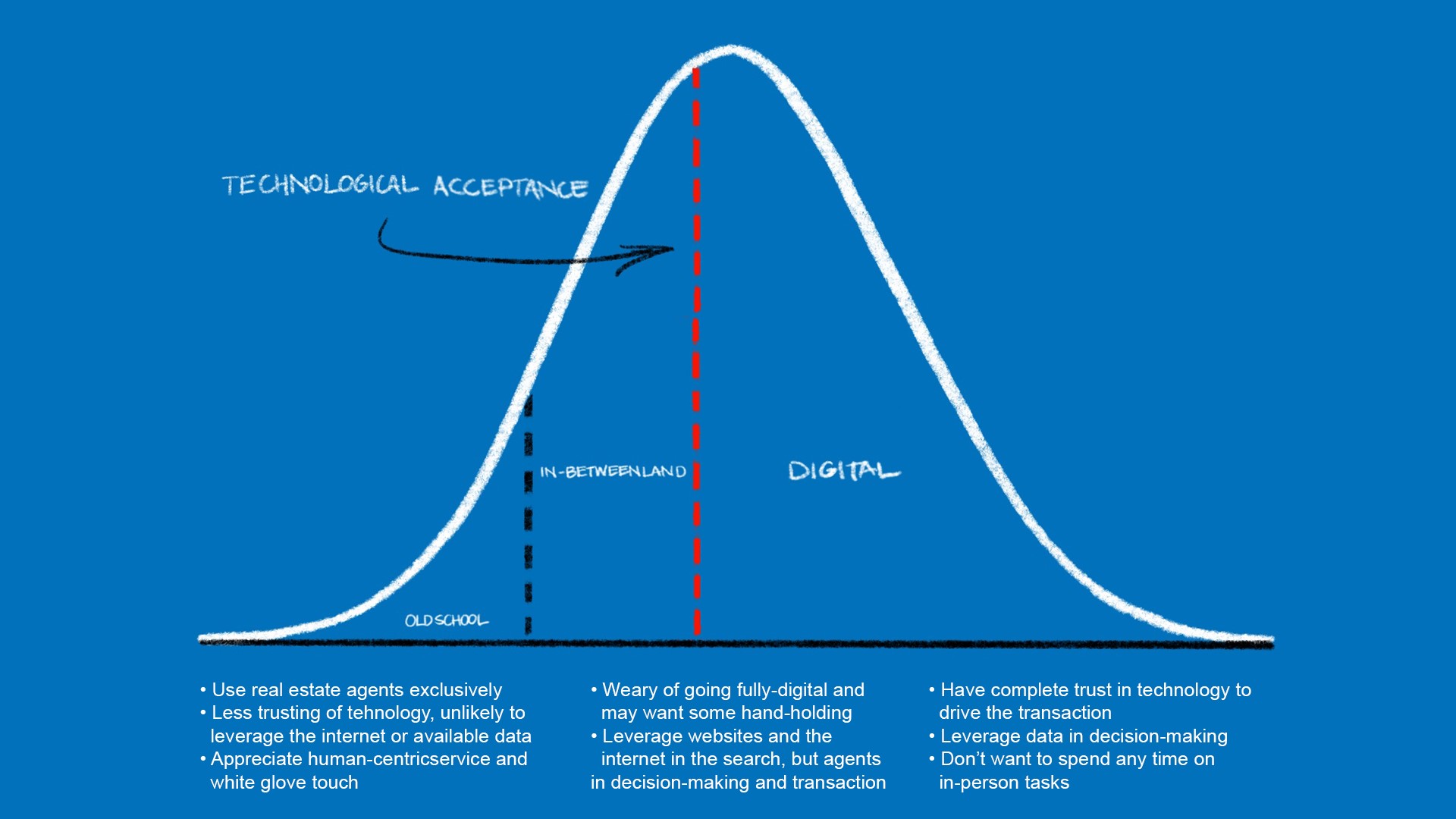 …then the real estate agent landscape could look very different, both in terms of the number of agents and what agents spend their time doing.

For example, consumers who leverage technology to drive more of the transaction thereby employ an agent to do fewer and fewer things and eventually the agent will only perform the few tasks that technology has a hard time replacing, namely providing the human comfort to a buyer or seller that they got a good deal and made all of the appropriate considerations throughout the process. It seems unlikely that the market will compensate a real estate agent as much as the current model for doing less work. This leads to commission compression, and an agent that needs to close more deals to get to their pre-technology income level. More work for the same pay = fewer agents. Not to mention the number of agents increasing at a rate that is greater than the growth in the number of sides, resulting in even more competition.  Opponents of this may claim that I’m oversimplifying the legal and title ramifications of a transaction, which I disagree with.

The further to the left the “acceptance line” is drawn, the more critical it is for remaining agents to leverage technology to make themselves more efficient. They’ll use tools to 1) find clients 2) provide clients the things they want to pay for and 3) manage their time and activities more efficiently. This could lead to the preservation of their jobs and income by competing successfully for a static number of sides.

If the line is drawn closer to Camp Digital, it’s going to look more like the status quo.

The last thing – and it’s a big thing – that can change the agent landscape are business models like Opendoor and Zillow Instant Offers that have the potential to facilitate standardized transactions completely within their own platforms. I won’t rehash the Opendoor model here, but the ability to buy and sell a home on their platform can remove an agent from the equation. Right now both platforms pay agents, but it’s a bit of a one-way street. Once a home is on the Opendoor platform, it can be bought by another owner on the platform. It’s off the MLS and out of the pool for potential agent commissions. Billions of venture capital investment and market cap are betting on this.

Some agents’ existing businesses won’t be touched. Their market and clientele may dictate that it’ll be business as usual, and they’ll continue to drive fancy cars and preach to the rest of the industry about how technology isn’t impacting the industry. Time will tell.

PropTech Financial Services Infrastructure
Digitally Native, Direct Insurance
The NAR Lawsuit: What does it mean and what is at stake?

What’s Happening Out There?
Digital PropTech Financial Services
Thoma Bravo’s Acquisition of RealPage: The Dawn of a New Age for PropTech

Remote Work: Technology Solutions to Transition
PropTech: A Remedy For The Lonely?
Branch Office Furniture and the Disruption of an Antiquated Space

The Tools That Will Power The Remote Work Revolution
Rising Through Resilience: “They told me it was impossible, but I did it anyway” With Noah Isaacs of Bowery Valuation
New And Growing Startups Use Branch To Furnish Their Ideal Workspace