From Definition to Valuation, “PropTech” is Messy

Nine Four talks about PropTech a lot (some say that’s all we do) and it’s clear that regardless of whether you’re an investor, a startup, a real estate practitioner, or just interested in the space, there are a variety of definitions of what “PropTech” or “Real Estate Tech” really is. I’ve never heard two people define them the same way. In a vacuum that isn’t necessarily a problem, but I do think that it’s indicative of what a lot of PropTech investors feel: that space is “messy”. It doesn’t fit cleanly into any existing category. As a result, that “messiness” can bleed into other aspects when discussing things like operational efficiency, valuation comparables, margins, or exits. That said, I’d like to share Nine Four’s definition of PropTech, as I think it’s one of the more broad definitions out there, and a few high-level thoughts as to why the space is “messy”. In the future I’d like to share my thoughts on how it might be simplified for better understanding.

Let’s start with the Nine Four definition of PropTech:

PropTech refers to products and services that impact the built world and the people, processes, and ecosystems that interact with it (across all phases of its lifecycle).

Let’s dissect it a bit:
• I think a phrase that’s key to understanding PropTech is “built world”. The “built world” refers to any infrastructure or real estate that humans build or manipulate. Roads, office buildings, apartment buildings, single family homes, utilities, industrial parks, hotels, medical facilities…everything that you see on Google Maps that isn’t a blank slate of land has generally been built or touched by humans. It’s no surprise that real estate is by far the largest asset class on the globe, and it should be no surprise that a lot of people, processes, and ecosystems are involved with putting everything you see on a map.

• The “people, processes, and ecosystems” that interact with the built world often do so with technology. If you’re a leasing agent for a multifamily building, you might create 3D models of the units, list them on a marketplace, or perform credit checks with a property management software. Each of those require software and technology. If you rent one of those units, you (hopefully) pay rent through a payment platform. Maybe you have a building app that allows you to authorize visitors to come through the front door, facilitates package delivery, gets your groceries delivered into your refrigerator, or your dog walked. If you’re a designer, an architect, a maintenance technician, an owner, a lender, even a roofer, you likely use – or are about to use – a digital interface to interact with something in the physical world. All technology-driven, all PropTech.

• “…across all phases of its lifecycle” is important because whether an asset is in development, under construction, fully built and in operation, in need of repair or renovation, or potentially in a state of repurposing/demolition, different people, processes, and ecosystems may interact with a piece of the build world at a different time. Each of those lifecycle phases also introduces different transactional elements, lenders, buyers, sellers, incentives, hardware, and software. Again, most of those are now technology driven or have digital interfaces. All PropTech. (As an aside, to further complicate things, entire segments of venture capital can focus on a single phase, such as ConstructionTech, that I also consider being under the “PropTech” umbrella”)

• The “ecosystems” that interact with the built world are also vast. Energy, mobility solutions, insurance products, appraisal and inspection are a small sampling of industries that touch – or are completely dependent on – a piece of the built world. They form ecosystems of people and incentives that are designed to align buyers, sellers, owners, and occupiers. Some ecosystems are built around transactions, others are built around the maintenance and operation of an asset. Again, most are now becoming digitized or at a minimum require a digital interface. All PropTech. 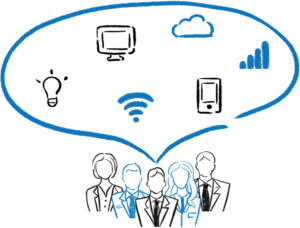 Since the definition of “PropTech” is complex and varied, it’s difficult to do seemingly simple things like figure out how much venture capital is invested on the space. People – and firms – like to put technologies and companies in a bucket, and PropTech is hard because it doesn’t fit nicely in a bucket. Venture investors often look at deals that interact with real estate and determine it to be “on the fringe” of what they invest in because business models and growth paths aren’t “clean” or “comparable”. They’re oftentimes a blend of several business models – out of necessity – and require not just integration between hardware and software, but also with real estate. When this ‘Player 3’ enters the game, things get more complex. As a result, when I see some PropTech valuations priced like a SaaS company, I get uncomfortable. More complexity and alignment should not, in a vacuum, result in a higher valuation, as the risk of execution, financing, and growth is typically greater. However, with the valuation game comes other variables like the stage of the company, the size of the market, margin potential, and overall profitability that can offset this and drive valuations sky-high (ask WeWork or Compass). Competition for deals between venture capital firms sitting on a lot of dry powder and real estate firms looking for differentiators have also helped valuations in the space to tick up over time.

In future posts we’ll continue to dig in to the nuances of what “PropTech” or “Real Estate Tech” is (and isn’t) and the subtleties of valuations in the space. We also hope to share some deeper dives into what we’re seeing in specific segments of the market. If there are any themes or segments you’d like us to prioritize, please let us know!