As I mentioned in my blog post last month, the construction payments industry is massive. Given its sheer size and complexity, Nine Four Ventures breaks down the industry into two primary segments: “enterpise” and “SMB”. The enterprise segment consists of traditional, large stakeholders including lenders and developers. The SMB part of the ecosystem includes general contractors (aka “GCs”), subcontractors (aka “Subs”) and suppliers. For all of the complexities that exist in the enterprise segment, there are many more in the SMB part of the ecosystem given the incredible number of constituents. Further, the lack of formidable software tools available to contractors, subcontractors and suppliers exacerbates major manual pain points around purchase orders, invoices, receipts and liens. Today, we’re going to take a deeper dive into those downstream challenges and potential solutions.

There are >3.5M licensed contractors in the US. Those vendors borrow $1 trillion per year to buy the materials they need from suppliers. However, of the $1 trillion that exchanges hands in the US construction industry every year, $100 billion goes unpaid. That’s billion with a B! Why does this happen? The status quo is a manual process without simple software tools to automate workflows. Often times, subcontractors go unpaid because they fail to track invoices and receipts and neglect to follow up because they lack the time, skills and money necessary. More specifically, subcontractors are typically in the field working hard and do not have the time nor energy, particularly after a long day of physical labor, to manually track down late payments. Also, subcontractors typically do not have a working knowledge of the lien process to navigate the legal environment and understand appropriate paperwork. As a result, payment recovery frequently requires expensive advice from lawyers which is often not an option for most.

Most often, it is simply unclear who a subcontractor is supposed to serve a lien to, given the multiple layers of constituents. This requires a lot of research either by a subcontractor or a lawyer. Typically, the general contractor is the first stakeholder a subcontractor or supplier will turn to for payment. However, general contractors are often dependent on developers who are subsequently reliant on lenders for payment. If general contractors do not receive the funds they are owed, they simply cannot pay the Subs and suppliers that desperately need the money. As delays pile up, Subs and suppliers move on and without an automated tracking system it can be difficult to 1) manage late invoices and 2) identify the appropriate stakeholder(s) responsible for payment given the many constituents involved.

Most importantly, there is no existing central authority in the construction payments industry to fine or prevent bad actors, who continuously fail to pay their invoices, from doing business. If software was used to manage the construction lien process it could be leveraged into structuring data to identify bad actors and hopefully prevent them from continuing to take advantage of SMB stakeholders. 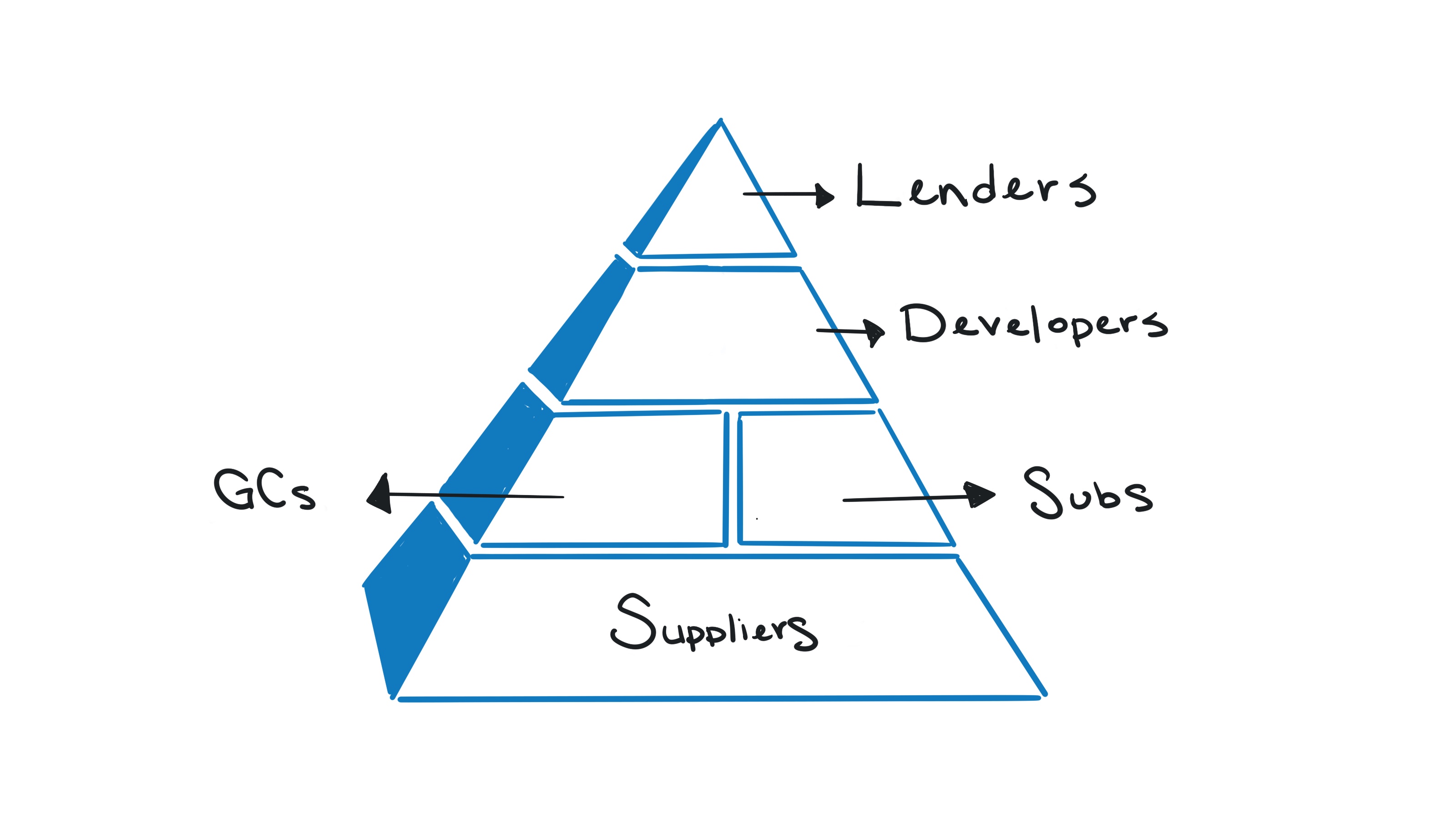 This begs the question, what can be done to solve this problem? A single payment rail linking both upstream and downstream parts of the ecosystem could assist in solving this challenge. This system of record could potentially serve as the source of truth to seamlessly manage and track fund flows from start to finish across all constituents. Today there are multiple companies attacking this challenge head on but from different points in the ecosystem. Built and Rabbet are connecting lenders, developers and general contractors in the enterprise. Levelset, Handle and Lienwaivers.io are connecting general contractors, subcontractors and suppliers in the SMB market. However, each part of the ecosystem has its advantages and disadvantages. The biggest advantage of working in the enterprise is the fact that customers (ie lenders and developers) control the assets required to pay SMB constituents and directly influence the flow of funds. However, lenders and developers require more complex software suites that smaller subcontractors and suppliers simply don’t need. The biggest advantage of working with SMBs is the sheer number of subcontractors, sub-subcontractors and suppliers that exist. If SMB constituents begin to automate their collections, they could potentially force upstream stakeholders to use a solution to manage all of the inbound requests. However, smaller customers have smaller contract values and naturally higher churn which may require larger customer support teams driving up costs.

In conclusion, it remains to be seen if a single payment rail extending from the lender all the way to the supplier can be built. Nine Four believes each segment is not mutually exclusive and cross-promotional and partnership opportunities exist between ecosystem participants assisting in stakeholder “buy-in” across segments. We believe each segment is more than big enough to support a massive business on its own.

If you’re a CEO/Founder working on trying to solve the biggest pain points in construction payments, please reach out. We would love to learn more about your business.

Why We Re-Invested: OpenSpace