The OpCo/PropCo Structure: Why Now?

A trend that Nine Four is seeing is the increased prevalence of companies raising a ‘PropCo’ to support their legacy operating business (“OpCo”). The OpCo/PropCo structure itself has been around a long time, but it doesn’t feel like venture investors have seen it nearly as often as we do today.

This post is intended to provide a brief introduction to the OpCo/PropCo structure, why startups are doing it, and some of the considerations it poses for startups, real estate investors, and venture investors.

So…what is this OpCo/PropCo thing?

In a typical OpCo/PropCo structure, a company is divided into two parts: a ‘PropCo’ that owns real estate assets, that are then operated by an underlying operating business, the ‘OpCo’. Historically the OpCo pays market rent to the PropCo and operates those assets under the OpCo business model. 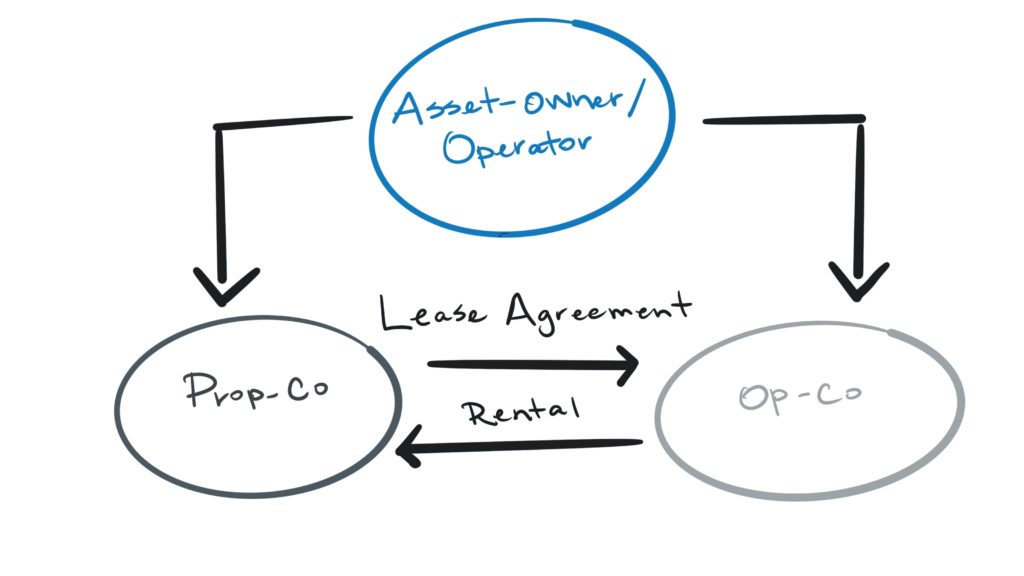 An example can be found in most hotel operators – most hotel brands do not own the majority of the real estate that they operate. Rather, they sign leases or management contracts with property owners to oversee most, if not all, of the property’s operations. OpCo/PropCo’s can be structured around almost any real estate asset class (single family home, multifamily, retail, or office, etc.).

Why are we seeing more of this in the startup world?

The infusion of more venture capital into the PropTech space has coincided with a rise in “tech-enabled” startup real estate operators. A quick Google search will unveil a slew of these startup operators targeting the short term rental, retail, co-living, and co-working spaces, just to name a few.

These companies – especially those with venture backing – inevitably run into growth challenges. Once a company believes they have the operations and unit economics needed to scale, they need to find real estate to operate. That, however, can be challenging.

Let’s take a startup operating in the short-term rental space as an example. Let’s call them STR. STR needs units to rent to their customers. The more units they operate, the greater their potential to make money. However, securing the units so they can be rented can be an expensive endeavor.

If STR decides to acquire a building to gain inventory, the company needs a lot of cash, a strong balance sheet, and a lender to be convinced that they’ll be able to pay whatever their loan is. An untested business model, no track record, and large transaction size doesn’t exactly bode well for a startup to get something like that done, or at a minimum done at acceptable financing terms.

Conversely, if STR decides to master-lease units, it’s less capital intensive but inevitably the business model, track record, and balance sheet are all called into question by a landlord in the same way a lender would on the sale-side. At best, a startup can hope to lease a few units, develop relationships with owners, and scale from within…but that can take an enormous amount of time. In addition, traditional landlords don’t usually rent to startups, or understand the nuances in doing so. Leasing multiple units to a single company can also fly in the face of why investors like to invest. In multifamily, for example, diversified income streams of tenants is thought to be very insulating to downside risk. If that same multifamily owner decides to master lease half of a building to a startup, all of a sudden they’re exposing themselves to large downside risk if that company goes under and they need to fill half of their building overnight. Lease terms therefore reflect the level of risk an owner is taking and can severely cut into the margins of the operating business.

A PropCo under the same ownership umbrella as the OpCo could potentially enable:

Not so fast! As you’d expect, it’s a bit more complex than that.

For starters, the PropCo needs capital. The most likely candidates to fund PropCo’s may be traditional owners and managers of real estate who largely understand how to value real estate based on fundamental metrics, underlying credit ratings of tenants, and operating history. However, they may not be able to assess the underlying risk of an OpCo operating a new real estate product, a new business model, or with any sort of technology/software foundation. As a result, investors may demand higher rates of return that chew into OpCo margins. They may stay away entirely. Lenders are also weary for the same reason, and insulate themselves with higher rates, smaller scale, and/or they’ll stay away entirely. Conversely, a PropCo may target other types of investors with a higher appetite for risk, however, it can go the other way with them: they may understand the OpCo, but lack the sophistication of understanding real estate operations and/or what returns to expect.

What does the prevalence of OpCo/PropCo’s in the startup world point to?

The prevalence of startups pursuing OpCo/PropCo’s points to the operational intensiveness of those businesses and the continued blurring of what a “PropTech” company really is. In today’s day and age, every company is at a minimum “tech-enabled”. The startups that approach PropTech VCs largely argue that they’re technology companies despite the reliance of their businesses on physical assets, labor, and operational intensiveness. Companies such as WeWork add fuel to the fire in that they’re largely venture backed and most press claims them to be a technology company, but many argue that they’re far closer to a traditional real estate operator. As it was recently put to me, if Laramar bought a software company, it wouldn’t make Laramar a tech company.

Something else that I believe this points to a tremendous risk, and opportunity, for traditional real estate owners and operators.

As a PropTech investor, we see startups building software to improve all aspects of building operations and management, from leasing and marketing to maintenance to energy use…pretty much everything. We also see these digitally native companies focusing their efficiencies on real estate products that are either new or becoming more popular, for example short term rentals or coliving. Those companies have the opportunity to slice off portions of traditional multifamily supply, for example, and develop massively valuable, scalable brands. See WeWork. Even if you don’t believe WeWork is worth anywhere near it’s current private market valuation, WeWork is still a behemoth. If you own the multifamily assets and lease your unit or building to these brands you could have a great tenant, or if you’re looking to buy a building, you could see more competition and agile supply, especially if there is an associated PropCo.

What’s in the future?

A fun part of sitting in my seat is that we have a front row seat in watching the PropTech space evolve as well as the different financing structures startups pursue to scale.

So there you have it! Hopefully this provides a glimpse into what we’re seeing on the OpCo/PropCo side and the potential the companies pursuing that strategy have on the industry. If you’re an owner or manager and want to discuss this in greater detail, drop us a line!