In our 2021 PropTech outlook, we summarized some of the trends we expect to gain steam throughout the year. While the summaries focus on the themes and trends from a product and services standpoint, we didn’t address the investing macro-environment, or what it may look like this year.

The topic came up last week ahead of a call with a PropTech angel investing group. I was thinking about what the COVID era has changed, and for me – and I expect many investors – it’s been my attention to the macro investing environment, and corresponding indicators and metrics I should be paying more attention to.

Some data, in particular, helped me to paint the picture of where things stand right now:

There is a LOT of capital in the system right now.

In this environment, the characteristics of software companies (private and public) are appearing more attractive to investors:

So while you have a ton of money on the sidelines, there are SaaS companies that look really attractive to deploy that capital in to.

The result? Valuations that trend like this – which, by the way – could be entirely justified if the above assumptions hold true or performance exceeds even these lofty expectations.

(It’s worth noting that as interest rates hover so low, future cash flows of growth companies are priced at a premium, so it’s no surprise that all of these macro-elements are spinning into valuation increases)

We’re also seeing a bulk of venture investment going to later stage deals, which creates exit pressure, especially when the public markets appear to have an insatiable demand for growth stocks. This pressure can be highlighted by the current SPAC boom that is showing no signs of slowing down: 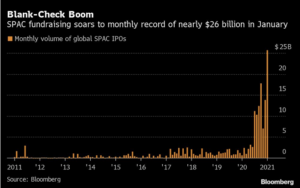 Separately, as valuations skyrocket, earlier-stage founders are taking advantage of a ‘hot market’ and raising more capital, sooner, at higher valuations, as the wave of higher valuations trickles down. As many of my investor friends are discussing, it seems like very few companies are running a ‘traditional process’ right now. Rounds are being pre-empted, there’s less time to get to know a company and perform the diligence you typically would, and the overall velocity and pace of deals is increasing. It’s been busy!

In the PropTech space, there’s been a bit of tension between what we’re seeing in the public markets and founder expectations. While companies can point to similar business models (SaaS, for example), many PropTech companies scale in relation to physical assets, whether it be units, homes, dollar volume of transactions, or otherwise. This can put a ceiling on the speed and ceiling for customer growth. That said, many in the real estate ecosystem would rather ‘hire’ software to perform a job than labor, and as software products expand and more processes are digitized, the software stack in real estate is becoming more important. So while the number of customers may be slower, expansion of products and services across those firms provide a growth boost.

Further supporting the argument for PropTech growth, firms that embrace a digital-forward way of thinking can streamline operations, have clean and readily available data, and enjoy healthier margins than a competitor who may be doing things in an analog way. At best, those analog players are likely slower and less responsive, which would shift the competitive basis from margins to top-line volume, as more efficient firms can do more with less, faster (*talking out of the other side of my mouth, faster does not always mean better, as I’m using an oversimplified summary here).

So what does this all boil down to? There is no better time than now to be an entrepreneur. User adoption and behaviors are changing in favor of adopting software and tech, there’s a ton of capital in the system to fund you with. So if you’re an entrepreneur and you’re reading this – go build!

Why We Invested: Steadily